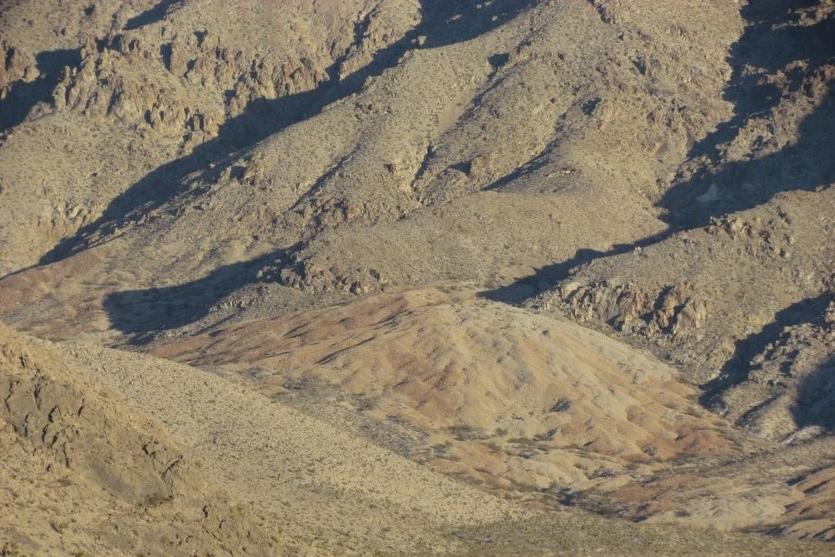 We were unable to locate a USGS Full Data Report for this mine, but have been able to confirm this site as the Picture Rock Mine.  This mine has the largest tailing piles in all of Goodsprings and we were expecting to find a massive mine system underground.  Sadly, we were unable to locate a single portal or collar leading to a mine interior.  All entries were covered very well or this was a surface operation.  I would be very surprised if this were a surface operation since they were dumping the tailings in place.

Just recently, I heard some men talking about something that happened while camping at this site a few weeks ago in late September 2016.  They chose this site because the trail ended high up on the mountain side where they would be better able to view and secure a perimeter.  These were all experienced campers and outdoorsmen  and hardly the superstitious type.

Throughout the night, they heard the usual sounds of small and larger animals.  Coyote, deer, and bighorn sheep are common to the area.  Just recently, mountain lions have been sighted just a few miles south of their campsite.  When you're out in the wilderness at night,  the slightest noise can become a grizzly bear in your head.

What they were hearing wasn't an unknown bump in the night.  They reported hearing a single engine small aircraft flying back and forth over the valley for hours.   Throughout that time, the plane got closer and closer until it sounded like it was circling just over them.   At times, it sounded so close that they thought it would become visible at any moment, but never did.  Even stranger, the aircraft was flying that low at night and had no visible lights.

Suddenly, the noise from the plane stopped.  The noise didn't decrease as the plane flew into the distance.  The noise just stopped and when it did, the sudden silence enhanced all other sounds.  Any movement appeared amplified, but eventually, everything seemed to return to nature.  They jokingly called it "The Ghost Plane".

After a while, they thought they heard what sounded like a man yell, "Sorry!" followed by irregular footsteps.  By "irregular", they described a couple steps, pause, followed by one or two more steps.  With spotlights on, they saw no person or animal.   Several times they heard the same call and each time saw nothing, but the footsteps continued throughout the night.

Being familiar with the area and all mines within it, I opened my laptop and asked them to show me on Google Earth where they were camping.  They directed me to the top of the trail at Picture Rock Mine.  On Google Earth, I showed them how close they were to the nearby airports and suggested they may have heard the nearby airport traffic.  They still felt the plane was circling them, but being so close to an airport, they found it less unusual.  Although they felt my explanation was plausible, it felt real to them and they were certain the plane was much closer and circling.

That discussion prompted me to research the mine at that location further.   We've researched and  been there many times over the years and have never found much more information other than a name.  This time, after just a few minutes of research, I came across a reference to a plane crash that occurred in the area on September 25, 1997.  On that date, a single engine Cessna 172  (Registration Number N84621) crashed killing the pilot, Daryl Phillip Stone.  There were no other occupants on board.

The men who related the story above didn't mention the downed plane and I highly doubt they were aware of it.  I've researched the area many times over the years and have even searched specifically for plane accidents south of Las Vegas and this was the first time I've found any reference to it.   Other than the men calling it "The Ghost Plane", there was no mention of anything paranormal, but I did laugh to myself for it crossing my mind.

Just a little more than 100 yards away.

Since this wasn't a passenger plane accident and happened back in 1997, there isn't much information available online, but I've linked what I was able to locate:

I will admit that their story about a ghost plane so close to a plane crash site makes for a great story, but I believe it to be merely coincidental.  Anyone that knows me knows I have no faith in anything paranormal.  You can get a better idea of my paranormal sentiments here.

They were close to the Jean Sport Aviation Center to their east in Jean, NV.  and even closer to their west was Sky Ranch Airport in Sandy Valley, NV.  Being between two small airports, they may have confused multiple planes around each airport as a single plane circling them for hours.  From their position, any lights from either airport would have been beyond visual range, so they wouldn't have seen lights from a plane they interpreted as circling.

I wasn't sure what to make of the "Sorry!" calling.  If I had to guess, I'd say it might have been coyote which there are plenty of in that valley.  Coyote are mostly known for howling, but they have many other vocalizations for many moods and activities.  It's possible they heard a coyote vocalizing and their minds attempted to interpret it into something familiar.  Maybe the coyote was apologizing.

I believe that most "paranormal" incidents can be explained with common sense, science, or even coincidence.  Some things can't be explained for reasons of not enough information or simply beyond our understanding.   Not knowing or being able to source something doesn't automatically conclude something is paranormal.  Sometimes, things just go bump.