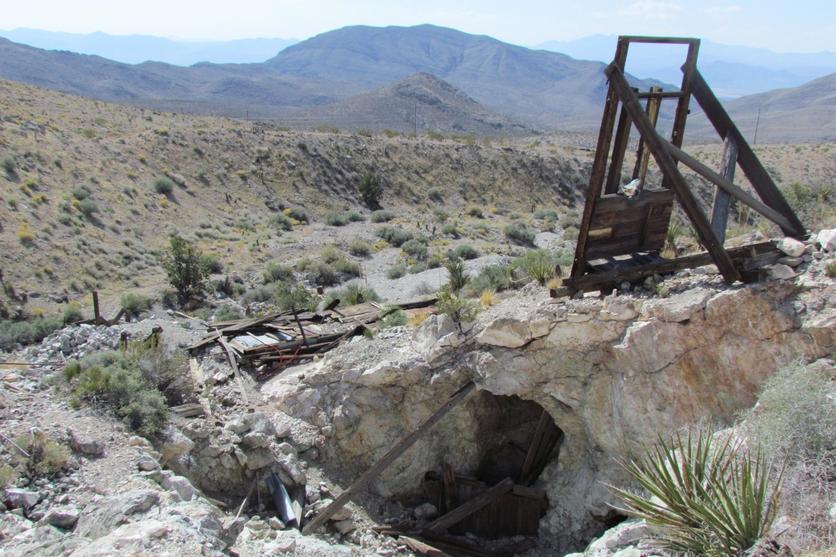 We came across this mine accidentally while traveling from Goodsprings to Potosi Mountain along a power line trail.  Our maps listed this as a prospect mine.  Because prospect mines often lack depth, we've passed this mine many times without a closer look.

The base camp was larger than expected for a prospect mine with steam tanks, motors and old car body parts.  A lot of effort was put into this mine with a ore track system in place,  incline shaft and sizable base camp.  The incline shaft had some depth, but has since collapsed, stored water and should not be considered safe.  Copper veins were visible at the surface and throughout the mine but appeared to decrease in quality with depth.

On a recent return trip to this mine, we came across a small group in a Subaru stuck in sand.  While getting them back to solid ground, we found out they were a paranormal research group.  The leader of this group called himself Dr. Chris*.  A self-proclaimed Doctor and expert of Paranormal Studies.   He said he didn't have a Doctorate in anything, but considered his knowledge of the paranormal equivalent to that of a formal Doctorate education.  The three women with him addressed him as Dr. Chris.   It was almost cult-like.

I've encountered these Ghost Buster types online and on location in mining districts.  I usually let it be known that I'm a non-believer, but I try  not to be rude about it.  I tend to not care what other people believe as long as it doesn't interfere with others, but I often find that those who do believe attempt to convince others.  That forces a conversation and I have difficulty having a conversation with someone who believes an unknown bump has to be a ghost.  Sometimes, things just go bump.  They seemed like harmless people, so I had no issues when they asked to follow us to the mine.

As my wife and I were gathering our climbing gear and doing our final equipment check,  I look over and see the Ghost Busters doing the same.  They had plenty of electronic gadgets.  Dr. Chris even had a custom bandolier like Chewbacca's for his equipment.  I pointed it out to my wife and we both shake our heads and quietly laugh.

Back to our equipment check, I keyed up my handheld radio, but just dead-keyed it a few times.  From the back of their vehicle, I heard Dr. Chris yell, "Whoa!  Did you see that spike?".   I look over and see he had an electronic meter along with other special recording devices.  My wife was slightly behind me with her equipment check and shortly after, dead-keyed her radio check and they all were amazed in unison over the spike.  I'm still not sure exactly what that meter was designed to detect, but it was reacting to our communications radios. Now, I'm not a religious guy, but I pray for opportunities like this.  We looked at each other trying not to laugh at the possibilities.

Leading up to the mine portal, there were relics everywhere.  As Dr. Chris touched a pressure tank, I discreetly dead-keyed my radio to make his meter spike and he removed his hand as if it shocked him.  He asked what it was and I told him a pressure tank to power the air tools.  He said, "I can feel the pressure.".    I did that to him a few more times and each time, he commented about what he felt while his crew hung on his every word.

As we approached the mines main portal,  I locked my radio to the key-on position, turned my back and motioned for my wife to do that same.  Dr. Chris was staring at the spiking needle of his detector.  At that moment, the wind caught the vent above the mine with perfect timing pushing a large gust out.  Dr. Chris said he felt a tremendous amount of sadness and anger.  He said to his crew while shaking his head, "This is all wrong.  Wind should go into a mine.  Not out.".

They all looked genuinely perplexed which amused us, so we never explained to them that the spikes were from our radios or the wind was from a vent above that almost all hard rock mines have.  They and their beliefs seemed harmless enough.   It was a fun day.

Dr. Chris, if you find this page,  sorry about that.  Don't let this discourage you.  Keep on Ghost Busting.
*The name "Dr. Chris" may or may not have been changed to save those involved from embarrassment and me from possible lawsuit.