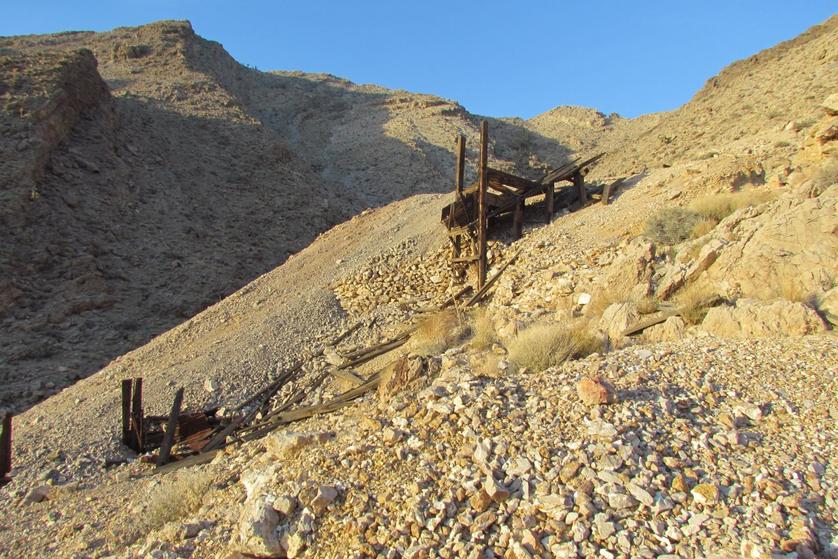 We were able to locate seven portals and collars to this mine.  Only three had significant depth.  Additionally, we found a few more occurrences which went nowhere.  The deepest was the portal to the west which our map indicated was three levels , but is now sealed with sturdy bat gates.

There is a small vent shaft that isn't at all obvious even on site.  A belly crawl under a ledge that appears natural ends at a shaft that is obviously not.  It appears as though natural rock slabs were placed and stacked over the shaft and the opening under the slab was widened by natural or animal means.  Before you go looking for this access point, you should know that this entry requires rope.  We also found shed snake skins  under the ledge access.   Since this entry requires a belly crawl,  you should also know that a rattle snake bite to the face will likely be fatal.

The lowest level explored had less than twenty yards of adits.  The rest of the open levels went in a few feet, had small stoped areas and abruptly ended.  There  was another level below us, but it had  standing water.   The source of the water appeared to be from either the damp clay pockets or seeping from the walls.  There was just enough water on the floor to qualify it as mud and we were fairly certain we could see the end of the adit, but it could have concealed hazards like wood flooring or a flooded winze and we felt it best to call it a day.

Something common to this mine and others along the same range was the radiant heat within.  There appears to be a seam of copper at the surface which transfers heat to the lower levels.  This heat, along with the standing water, creates high levels of uncomfortable humidity.

The hopper visible from the paved road to the east was supplied by a deep shaft directly behind it.  The shaft followed 80-100 feet along an obvious vein of zinc ore.  By estimating our position in a lower adit, we were able to locate the bottom end of that shaft which we previously believed was there for ventilation.

We've heard and read reference that the east and west portions of Whale Mine were connected.  After thorough exploration of all internal areas, we could confirm with great certainty there was no way internally from the east to the west.  With exception to the connected shaft mentioned above, all internal areas operated independently of each other.  The only connection from east to west was a foot trail and possibly the aerial tramway.

As far as we know, these are the only internal images of the whale mine available online.  There's not much more in this mine than you see in the gallery.  Do not remove or alter mine safety barriers or devices.