Saint Louis Mine is between Nelson and Searchlight, but is just slightly closer to Searchlight.  Prior to visiting, we knew nothing of the mine.  We were following the broken trail from Nelson to the South.  It would have been easier and faster traveling along the pavement, but we wanted to be sure we didn't miss any of the smaller mines in the area. We should have kept to the pavement.  It was a long way South from Nelson to Searchlight and there was little to see between the two.

Structurally, there isn't much to this mine interior even at the lower depths.  This mine followed a vertical  seam between sedimentary metamorphic rock that wasn't immediately obvious.  The ore they were removing appeared to be rust red and possibly limonite.  We now know Saint Louis Mine was primarily a gold mine.  We observed nothing obvious or free mill.  What we have around here is a very fine flour gold, so it's not surprising there wasn't enough gold at this mine to maintain itself.

We almost talked ourselves out of rappelling to the lower levels because we saw very small volumes of tailings, but we knew that large mines could have little tailings with a well established trail for trucking.  The trail was built up, across and down the mountain and made as a continuous loop so trucks would only have to move forward.  The effort put into the trail  made us believe there was more to the mine.

The only places to secure top rope was to one of several rickety foot bridges.  After determining it was "safe enough", I headed down just out of view and immediately came right back up because it abruptly ended.  Finding another location to secure rope, I headed down and found the same abrupt ending.  In all, we located three ways down and unless there was a way down we didn't locate, all lower areas ended abruptly.  The only exception was a small stope at the bottom where anything of value was removed .

Over the past few years, we've noticed trail improvements up to the mine and it did appear that new survey flags have been placed in the valley below.  We have since learned that this property (85.54 acres) was purchased.  According to the Clark County Government Information System Management Office (GISMO), Parcel: 232-00-002-016 (St. Louis Mine) was purchased in December of 2011 for $10 and "other valuable consideration".  They list the property value at $250,000, so $10 and  "other valuable consideration" sounds like a great deal.    The link to the document copies are available through the parcel number link above.

We recently returned (October 6, 2014) to see what progress has been made at this mine site.  We were hoping to see signs of drilling or active mining, but found no progress at all.  The survey flags we noted previously in the nearby valley are now gone.   They were likely there  to mark placement of a wildlife water station I don't remember seeing previously and had nothing to do with the mine.

We were approached by one of the locals who was hoping we were with a mining company so he could apply for work.  He said he saw an excavator nearby a while ago and was told they were only there for the day.  "A while ago" to him meant 6 months to over a year ago.   He does remember that the excavator did no digging and was unloaded just long enough to pose it for pictures near the mine.   There are currently no independent signs or a permit board posted like one would expect to see at a mining site.  The only new sign on site is a "Stay Out. Stay Alive" warning sign common to almost all abandoned mines.

I do have to wonder why a company would go through the effort and expense to  pose an excavator for pictures.  I keep hoping to come across the excavator photo shoot somewhere that might add context, but have yet to see them.  Maybe my source was mistaken about the photo shoot location.  It's also possible that event had nothing to do with the mine.  That's a lot of trouble to make a mine look like it's being worked.   Maybe someone is just trying to sell an excavator.

As of this update (October 9,2014), the St. Louis Mine is inactive and looks just as it did when abandoned many years ago.  It is my personal opinion that this mine will remain abandoned because of the insignificant and small size of the deposit.  I am basing this opinion on the USGS Full Report.  Hopefully, I'm wrong and it means the company will develop this site.  The locals could sure use the work.

Some images in the gallery below appear to be duplicates, but were taken months or years apart.  They were included in the same gallery intentionally to demonstrate the lack of movement or progress.   We'll return at a later date for further updates. 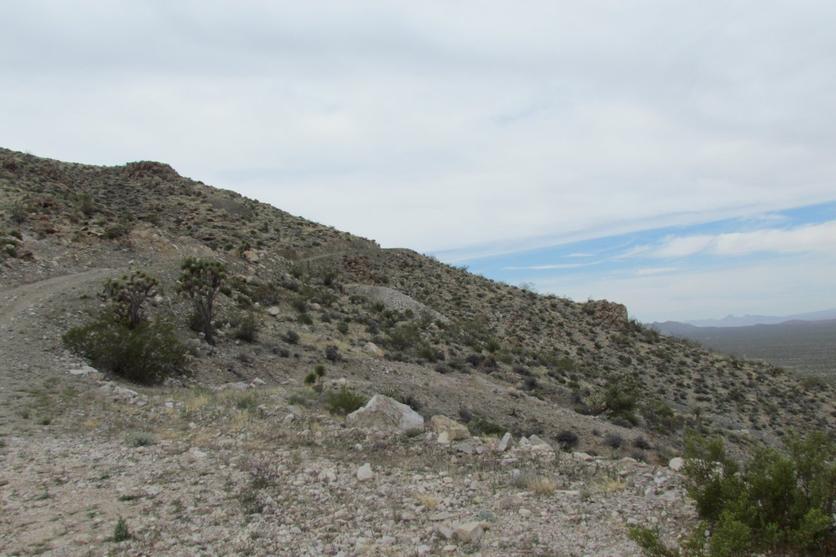