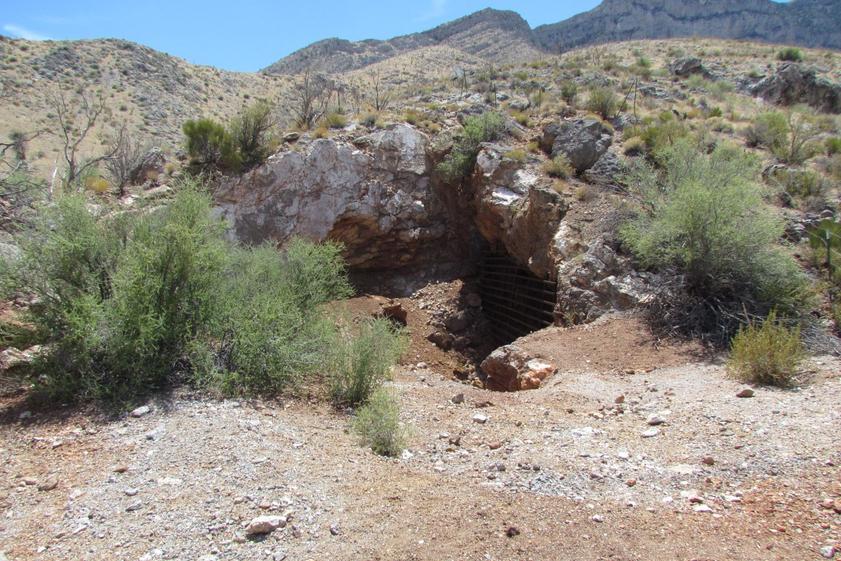 As with most of Goodsprings, trail conditions have continued to deteriorate over the past few years.  From the East is uncomfortable even in a high clearance 4WD vehicle.  The trail is longer, but much more tolerable  from the South.  Even with a well built 4WD vehicle, some may choose to hike the final approach to the cabin.

There isn't much to see at the mine site.  Bat gates have been installed years ago, but the lower portal gate has since been vandalized.  The condition of this mine is extremely unsafe. The main adit only goes back 20-30 yards.  At the end of that main adit is a collapsing stope and shaft that is poorly shored.  Our interior map listed the shaft at 400 feet, but considering the lack of infrastructure and the size of the tailing pile, I believe our interior map was more of a plan than actual workings.  Even if the interior map was accurate there would only be a small stope at the bottom and not worth the risk or effort to reach.

There are great opportunities for mineral hunting on the surface.  We've found high quality specimens of copper weighing over 20 pounds each.  The amount of copper discarded into the tailing piles was surprising considering this was listed as primarily a copper mine.

In 1942, the War Production Board issued Limitation Order L-208 which required that all mines not producing materials for the building war effort were to be closed.  Any mine primarily mining gold would be closed. Some gold mines closed and never reopened.

In order to remain mining gold, some mines simply re-registered primary mining from "gold" to anything found locally to meet the new L-208 requirements.  They would still be gold miners, but on the books, primary mining would be for  copper or zinc and gold would be secondary or tertiary.   If  I remember correctly, there were just three mines within the district that list gold as primary mining.  I would guess less than three did not list gold as secondary or tertiary.

After a brief surface exploration of this mine, I would suggest giving more of your time to the Ninety Nine Mine cabin.  This A-frame cabin has been repaired several times over the years and even served as the forward base camp for the 1942 Carol Lombard plane crash site.  Actress Carol Lombard co-starred in a few comedies, but is most known as being the wife of Clark Gable, star of  "Gone With the Wind".

We've returned to this cabin at least once a year attempting to locate a natural spring that is supposed to be somewhere above.  We've followed water pipes that head up the wash, but have yet to locate a water source.

Something curious we came across within the same valley is what appeared to be an unmarked cemetery.  Plots were large and marked with stones.  Headstones were carved into wood and barely legible with names like "Tanky Bo" and "Sunset Conata (May have been a misspelling of 'Sonata')".  Judging by the names and plot sizes, I would guess that we came across a horse burial site, but I've never known miners to give horses that level of respect.