This mine is listed in the Nipton, CA directory, but is just north of the border in NV.   Primm is the closest town, but is too far to be accurate, so I included it in the Nipton directory. There is a way to get to the Lucy Gray mine from Primm, Nevada by going around the dry lake bed and following the railroad tracks, but it's mile after mile of washboard trail until you can cross under the railroad.  Normally, this wouldn't bother me, but until you are able to cross the tracks, there's nothing interesting to see.  You can't even see the mountains on the other side of the elevated tracks.  I found the best way there is from the Nipton side which is further, but much faster.

Be aware, the Lucy Gray Mine is located just north of the  Nevada border, but if you approach from the Nipton side, you will briefly pass through California.  Being along the border, this is an area we've seen regularly patrolled.  I only mention that because I know many of you travel armed and California requires that firearms in a vehicle be unloaded and locked/cased.  Violations will, at a minimum, have your firearm(s) confiscated and likely end in arrest.

Sadly, the Lucy Gray has been sealed by backfilling, foam, and bat bars.  We have found no alternate way in.  We were told there was a vent shaft that may have been missed which could possibly allow access.  We were later  able to locate the rumored vent shaft at the top, but found it sealed as well with bat bars.  The cabin is in surprisingly good shape and there are still plenty of relics including tools and furniture.  At the base of the mine is an old yellow dump truck.  I popped the hood and it looks like it was just parked there at the end of the shift.  Give it some diesel and a fresh battery and it just might start.

This area is posted as radioactive,  but it is an unofficial warning.  Thorium and Uranium were mined in the area, but many miles away.  According to the USGS Full Report, neither were listed as secondary or tertiary ore at this mine.  It's possible that the mine interior contains elevated levels of radon, which is common for hard rock mining in this area, but would not be harmful from the ventilated surface.  The mine is sealed, so radiation is not an issue.  The warning was just spray painted on site.  I think someone may have been trying to keep people away or trying to be funny.  Don't eat the dirt and you won't get super powers.

It was said that a Mormon prospector returning to Utah discovered a curious blue patch of mud in the McCullough Mountains near the Lucy Grey Mine.  It was unfamiliar to him, so the samples he collected remained in cigar tins for years until he rediscovered them in storage.  When closely examined the blue mud was found to be encrusted with diamonds of varying quality.

The prospector returned to the McCullough Mountains where he believed he collected the samples, but was unable to relocate the blue mud.  Diamonds have been found in every US state, but most often in waterways and never at the source which is a pipe of igneous rock near volcanoes.  There have only been two commercial diamond mines in the US and neither were in Nevada, but the legend is still plausible.

The description of the blue mud best describes decomposing kimberlite, the igneous rock best known as a host rock of diamonds.  Volcanic activity is evident throughout the area and the lost diamond search spread as far South as Potosi Mountain.  The entire range has been heavily prospected for many decades.  At this point, it's unlikely an undiscovered diamond pipe will ever be found.  Some say the story was always a hoax.  True or not, now you know the origin of Blue Diamond Road. 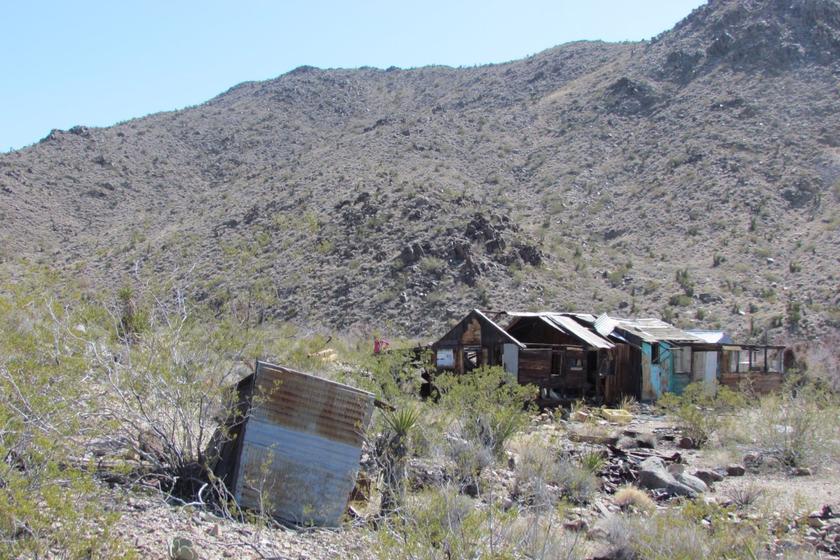