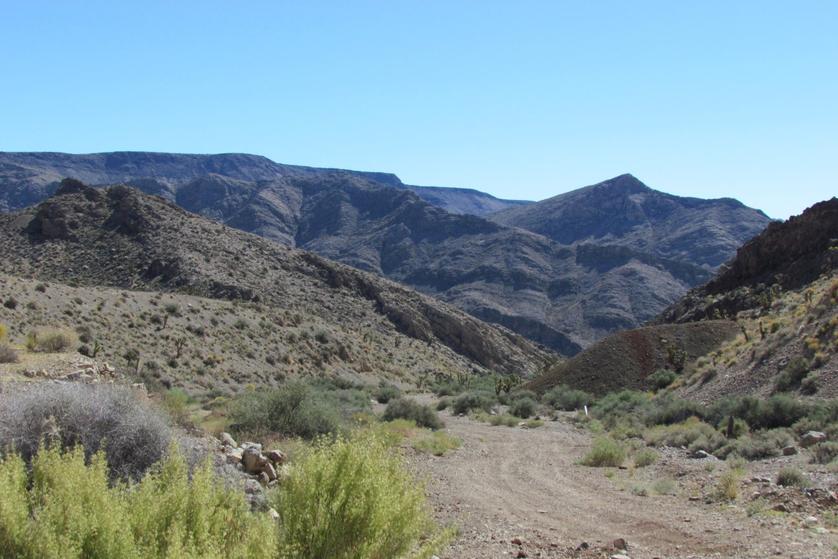 We've seen the Kirby Mine listed at several different locations within the same valley.  I was able to locate seven registered Kirby Mine sites.  Each registered as Kirby Mine 1-7.  Since all the mines within this valley were called "Kirby" I'll  just consider all mines in the entire valley as Kirby Mine and not attempt to display each as individuals.

We were only able to find one open portal to any of the lower and easier accessed mines which happened to be the most obvious mine (pictured above) in the valley.  The most obvious  open mine directly road-side went back 100-150 yards, but was mostly  featureless.  The only feature that comes to mind is the plastic runner covering the first few yards of the mine entrance.  On this unrolled plastic sheet are measurements indicating each foot in length.  We've seen this in mines further south and know it to be used to collect bat guano.  Using known data, the amount of guano collected per foot can be used to estimate the bat population.

To date, we've reached and explored 6 of the 7 Kirby Mine sites.  The most difficult to reach were sealed using either bat bars or a basic barb wire obstruction while the sites within easy reach were wide open.  It's difficult to understand the reasoning behind the closure process.

The highest Kirby sites in this valley had very little depth.  We have a historic map of the largest of the Kirby sites that shows the mine to contain a total of three levels.  The largest we've located only had a main adit level and a very short lower second.  I would consider that lowest level more of a stope than a level.  None of them matches our map.   The last remaining unexplored site has no established trail and a barely noticeable tailing pile making it unlikely to be the site depicted in the map, but we'll add it to our growing to-do list to verify.

For legal reasons I'm reluctant to mention a company name, but earlier in 2012, a large mineral exploration company began closing off trails in this and surrounding valleys claiming it to be "Private Property".  This companies website claimed that this area and the surrounding 12,000 acres is 100% owned.  We were in contact with one of the companies Vice Presidents at the time and receiving regular updates on their progress and plans.

According to the Geographic Information System Management Office, most of this area is still public land under BLM management.   GISMO stores the data the Tax Assessment office uses, so it would be the most accurate.   What I found was small plots in the area were owned or had active claims, but even combined the total was nowhere near their claimed 12,000 acres of "100% owned" land.  I may have asked too many questions because contact with the company abruptly stopped.

The company originally claiming ownership of the 12,000 acre parcel is no more and has been consumed by yet another mineral exploration company.  The new companies site still claims to own the land, but most of the information has been removed, altered, or contains links that lead to nothing.  Earlier this year, the "Private Property" sign leading to this valley has been removed.  No work has begun at this or any of the nearby mines.  I suspect this company will be renamed or consumed by, yet another, exploration company in a short time.  If a mining company isn't really mining, but selling stock,  you can guess what they are really doing.

If this property was indeed purchased and there were existing trails leading to other public access areas at the time of purchase, the new property owner would be obligated to honor previous access agreements.  I do hope this was just a misunderstanding of the mining claimant and not someone over-reaching their claim rights.