We originally visited during a rainy month and found the portal flooded.  While inside, a steady stream increased with rain.  It's unlikely that the volume of water came from the few open vent shafts.  The source of the water volume is unclear.  Possibly from water collecting in fault crevices at the surface.

The mine interior was common to the area with nothing remarkable or specific other than the ore cart tracks still mostly intact.  Most mining companies removed the tracks to be used at another site when the valuable ore is depleted.

There are four listed Ironside Mine sites within the same valley.  The images below only show the largest of the four as the remaining three had little tailing piles and we suspect them to be little more than prospect mines.

Our historic maps showed three levels at this location.  The main level and one up, one down.  We've explored the main and upper levels and found them to be unremarkable.  The lower level was partially collapsed.  Our map showed another section that is no longer accessible.

Something within the rock face at the lower levels appeared different.  We are familiar with the color of oxidizing copper which is a Statue of Liberty tint radiating from the copper itself.  We were seeing something else.  A dense  blue/green within the rock face that apeared to be oxidating, but started off as a deep blue/green which is unlike copper we've seen in the area.  A scratch test confirmed what we found was blue/green to its core and not just on the surface as copper would appear.   I need to research this further.   It could be nothing. 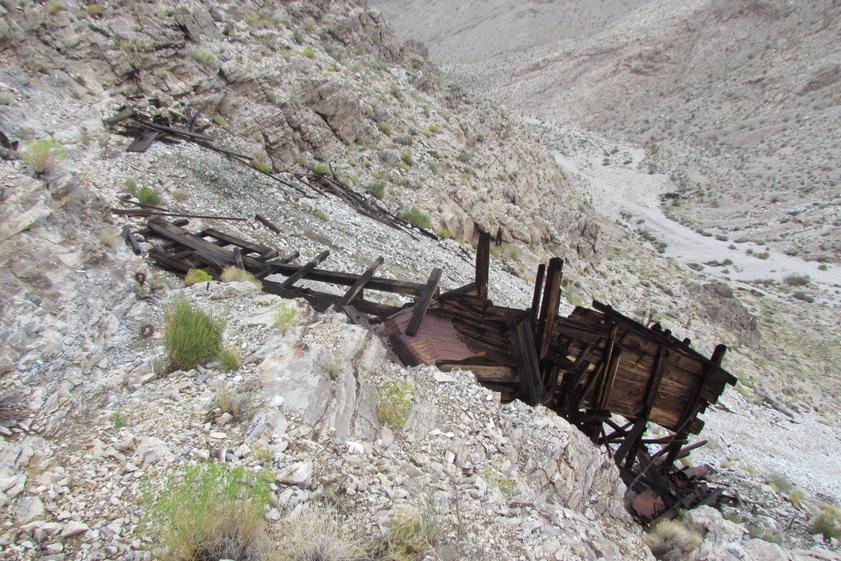