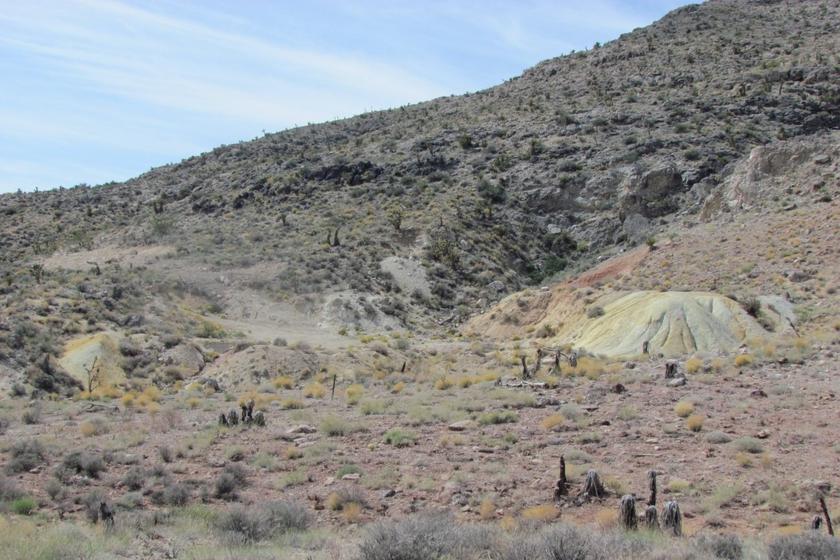 Until recently, Iron Gold Mine was secured and posted as "Private property" .  The signs were well aged and research indicates the mine is just south of privately owned land, but since it was posted, we respected the boundary.  We were recently informed that someone burned through the foamed portal, the area is no longer posted, and we again confirmed the mine is in public land.

Other than pockets of clay, limonite and quartz, the main level of this mine was mostly featureless.  There were three ways down to the lower level of the mine.  The first two converged into a narrow and short adit that abruptly ended.  That section of the mine held seeping clay that was sagging from the walls.  In some spots, the walls were so damp, you could press against them and water would  seep from the walls.  The ladders and timbers were weakened by the constant state of high humidity.  That was the largest of the three ways down.  Unfortunately, because of the unsafe conditions,  we chose to side with safety.

On a nearby hill, there was a memorial cross.  The inscription on the cross reads:

In 1933, Roosevelt was President.
A gallon of gas was 10 cents.
Construction of the Golden Gate Bridge began.
Prohibition ended.
Mount Rushmore National Memorial was dedicated.
Unemployment was over 25%.
The country was deep into a financial depression and the Dow Jones Industrial Average for the year was in the low to mid 50's.