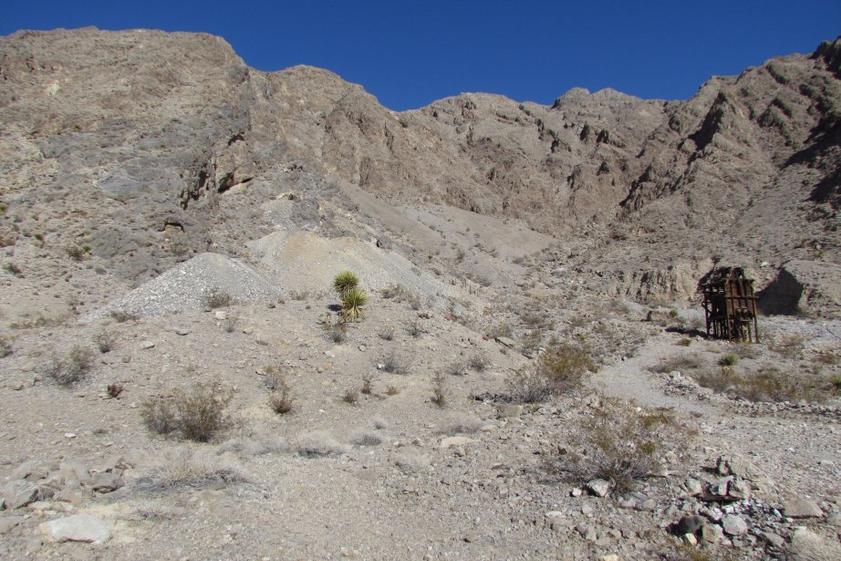 Throughout the mine exterior were thriving melons.  I imagined the miners taking breaks, eating watermelon and spitting seeds.  That was just my imagination creating a scenario of the times.  We later learned that these were Coyote Melons (Cucurbita Palmata).  An inedible melon that is not poisonous, but should be avoided even in an emergency situation.   It's a bitterness that you'd taste for hours.

From previous visits, we noted that much of the interior rail system was still in place and there was a section of railing that twists sharply down into a stoped incline shaft.  I balanced myself down the rail and sadly it ended abruptly at a collapsed section which appeared to be intentional.

Most of the levels below were either collapsed, abandoned abruptly, or had nowhere safe to anchor rope to rappel.  As far as we could tell, the source of the large tailing piles came from the shafts above.  Other than vents, we  found no connection from the lower adit that may have reached the upper workings.  Interior air at the lower levels was stale.  Although we did not test air quality, we suspect air quality at those lower levels to be poor and should be presumed to be unsafe.

We located two shafts above that appeared to  follow a vein along a fault line.  These upper workings once connected by aerial tramway to the large ore hopper below. Because these shafts were exposed, the shoring was dry, brittle and collapsing.  Safely securing rope anchors for a rappel was not possible and not attempted.  We suspect the upper workings were the original Ingomar Mine and the lower levels were the expansion and exploratory levels to get to a larger ore body below.

Ingomar mine has since been sealed.   As far as we've been able to research, these are the only interior images of this mine available online and there is nothing more of interest than what you see in the gallery below.   Do not remove or alter safety devices or barriers.  If the person(s) attempting to torch and cut their way through the bat gates finds this message, would you please stop?  If a mine is to be closed, bat gates are the preferred method, but is a costly process.  If those responsible for the mine closures feel their closure methods are being defeated, they may choose to save money and close with foam and backfill the next round of closures.