Update:  Sometime in late June or July of 2018, and after our initial visit in mid-June, a new project permit board has been added at the property edge.  Do not alter or bypass this assumed property boundary.

This is a mine we've been wanting to reach for years, but it was occupied and working until fairly recently.  Sometime in early 2017, the mine seems to have been abandoned again, but trespassing signs remained.  In late 2017, the bulk of the remaining equipment was removed and signs came down.  We've known people to remove trespassing signs so when they return at a later date, they can say they didn't know it was private property.  For that reason, we waited half a year before returning.

An "occurrence" is ground disturbed by mining, but not significant enough to be considered a prospect mine and often called "test holes".  This valley had at least half a dozen occurences leading up to the main mine portal.  The amount of effort put into testing had us hopeful that there were significant workings.

I wish I could say it was everything I hoped it would be, but other than a few good sized stopes (void left after ore body removed), there wasn't much to see.  The most recent company appeared to hold this mine  for 2 or 3 years, but there didn't appear to  be any significant infrastructure or trail improvements that would suggest or support heavy equipment.  Since I was unable to locate any recent MSHA (Mine Safety and Health Administration) status update for this mine, it's doubtful there was any recent significant mining.

The most interesting parts of the mine site were the wood structures on the surface and the view of the valley below.  Still, we haven't been inside a mine new to us in a while and it was great to finally cross this one off of our list. 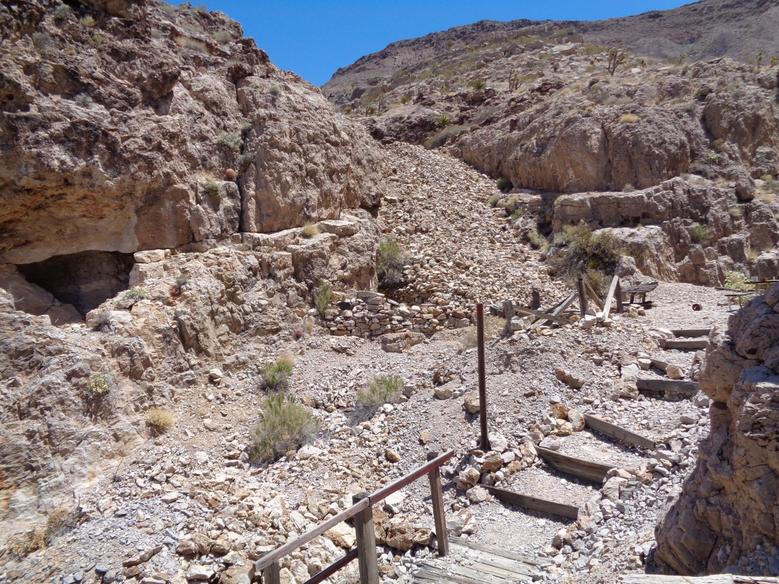