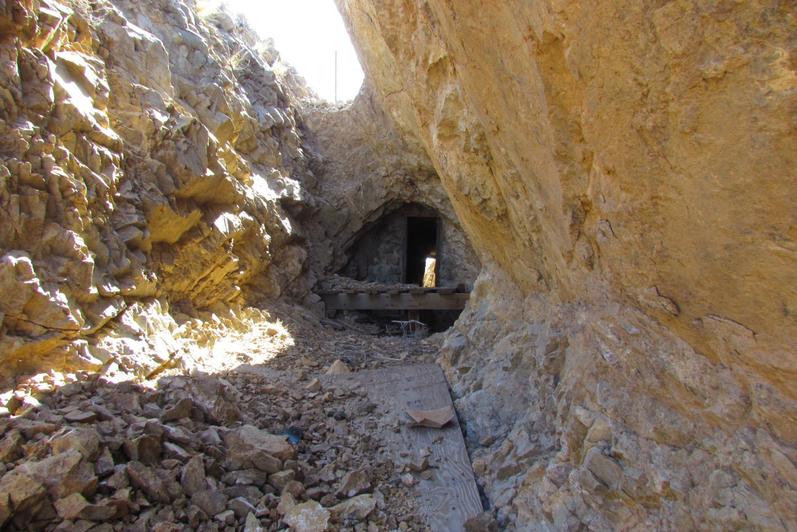 Locating information specific to this mine proved difficult.  Mostly because we were researching it under "Honest Miner Mine".  We do know that this was a correct registered name for the mine, but it was only registered as an alternate or previous name.  Its most recent and recognizable registered names would be the "Rand Mine" or "Eldorado Rand Mine".  It seems that almost all mines in the general area were part of the Rand Mine group at one time.  Because it is not in direct proximity of either of the larger Rand Mines, I chose to use its previous name to provide a little separation .

We've returned to this mine over the years hoping to rappel into the single collar shaft, but each time we've returned there have been clumps of cholla cactus throughout the area. During our most recent visit, we noticed the cholla cactus bits weren't going anywhere.  Some have even begun to take root, so we assumed our window of opportunity was closing.  This update has been several years in the making and we've finally completed its exploration.

After all the anticipation over the years, we now know that the images of what might be down there were far greater than what we found which was just a little bit of nothing.  In the gallery below, you can clearly visualize the ore bearing fault line.  The shaft was dug below that seam and leveled off for less than 10 feet before ending abruptly.

Modern mining operations will drill test cores to know depths and ore composition before production begins.  Digging the shaft below the ore seam was the historical equivalent of core drilling.  In this instance, it was decided that the ore body was not significant enough to proceed to production.