There will always be some with brand loyalty, but  handled ascenders mostly seem to be variations of the same design.  I imagine any future improvements to this proven design will mostly be in ergonomics and materials.  Just pick a quality brand that fits well in your hands and commit it to memory.

Our most recent pieces of gear are the NForce ascenders by Black Diamond. These are new to us, but by the time we were able to find them locally, the ascenders were already removed from market and replaced with a newer, redesigned model. To some, it might seem unfair to compare a retired product against the Petzl Ascension with over twenty years on the market.   The reason I wanted to continue with this comparison is because the NForce was the only attempt at reinvention in decades.

Both ascenders in this review operate under the same principles of a cam action.    Teeth embedded into the cam surface grip onto the ropes outer sheath.   Pressure applied to the cam locks the toothed surface to the rope.

The Petzl Ascension (image below) is a simple and nearly perfect design of cam principles which has allowed it to remain mostly untouched for decades.  This style of mechanical cam action ascender is how I learned to climb.  We've owned the set below for almost twenty years and they've performed flawlessly at all times. 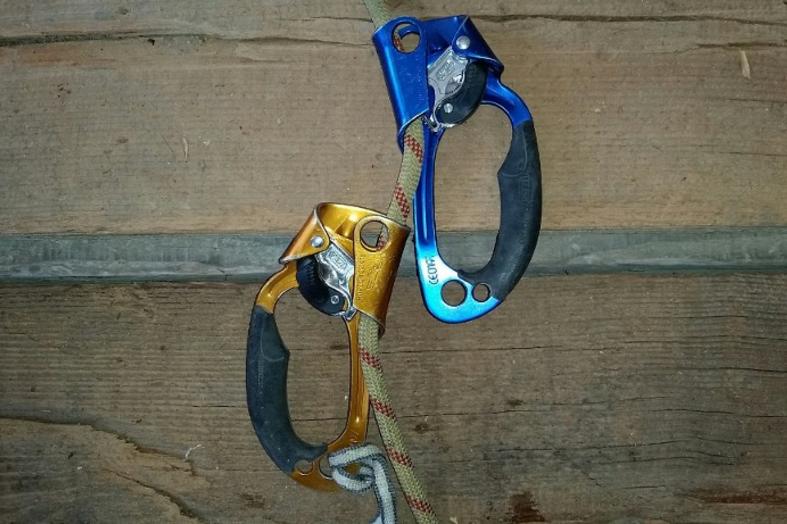 At first glance, the NForce looks about the same as the Petzl Ascension, but upon closer inspection, you can see that it's a complete redesign of previous technology.  (image below) The NForce uses the same cam style as almost every other handled ascender on the market, but applies pressure in a new and unique way.   Previous designs relied heavily on teeth at the cam.  It's difficult to describe without motion, but the largest rivet at the top of the ascender is the pivot point.  All the climbers weight at the carabiner and handle is applied to the cam which, in turn, applies more force and friction to the rope.

Other new design features include more ergonomic finger loops and a trigger to apply and remove rope, and relieve rope tension for short descents and positioning.  One of the best improvements this ascender has over the others is the large lower carabiner loop.  The loop is large enough for a locking carabiner to be spun in all directions and through the device.  This seems like such an obvious improvement that I'm sure you'll be seeing this feature on all new manufacture redesigns. 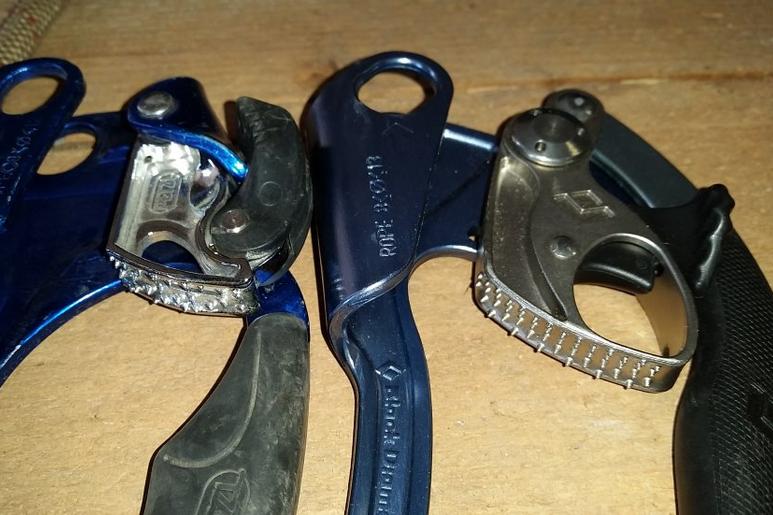 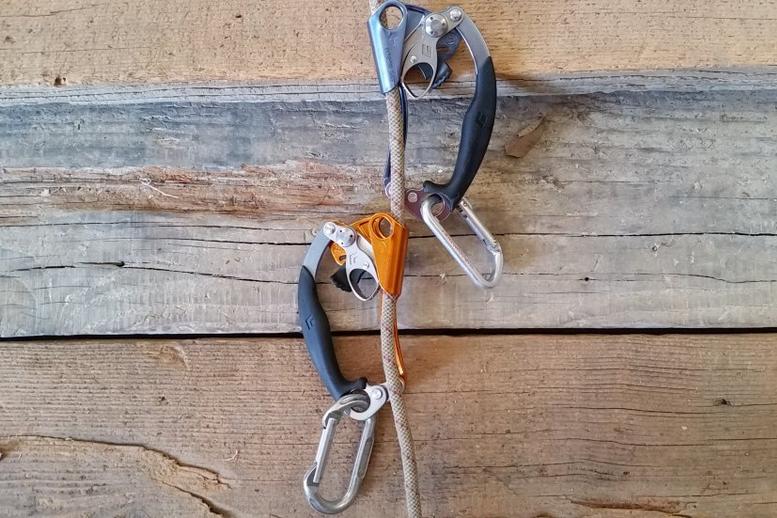 After using both the Petzl Ascension and Black Diamond NForce, they operated in much the same way.  Both slid up the rope effortlessly, but the Ascension did have a slide advantage.  The NForce does require slightly more effort to slide up the rope, but this may have more to do with the extra 1.4 ounces of the NForce than resistance.  For someone strictly mountain climbing, every ounce dropped will help.  If anyone here has seen how much gear we carry, an ounce or two more isn't going to be noticed.

A small amount of  people in climbing forums and product reviews have complained that the NForce has too many moving parts.  I count four pivot points.  I don't think four is too many as long as the moving parts are of high quality which they seem to be.  Another complaint I read, which did concern me,  was a few people have reported minor slippage while engaging the device.

The Petzl Ascension (image below. Left)  uses less, but more aggressive one way teeth.  The Black Diamond NForce (image below. Right) uses less aggressive, but more teeth over a larger surface area.  That and the trigger pull make clearing rope much easier.  For short descents, the NForce  has the advantage.

Comparing teeth to the Ascension, you can see how a slip with the NForce could happen.  The Ascension teeth are angled one-way,  longer and dig deeper into the rope sheath.   The NForce relies less on the tooth design and more on the applied force.  I'm curious to see how this difference affects rope life in the long term.

We've only had these ascenders for a few weeks, but tested them almost to the point of abuse in an attempt to simulate the slip conditions.  In  mid-hang, I would jump on the static rope, but was unable to recreate a slip.  The only time I was able to recreate anything close to a slip was while sprint ascending.

I'm reluctant to even call it a slip because that would imply movement while engaged which it did not.  This downward movement occurred at that split second just before rope engagement and only at unreasonably fast ascents.  Even though I was attempting to recreate the slip condition and downward motion was only an inch or two, it did make me lose some confidence in the gear.  After a slight change in technique, I was unable to recreate the condition.  Hopefully, this was not the reason for the product removal from market.  This slippage was slight and only recreated under conditions nobody should be climbing anyway.

Although Black Diamond gave a great effort in redesign, other than the larger carabiner loop and trigger relief, they failed to make any real improvements over existing cam designs.  If they used a more aggressive tooth pattern and were able to reduce the weight, they may have been able to covert some climbers.  Black Diamond has since replaced the NForce with their newest ascender, the Index.

The new design dropped the over-complications and improved on simplicity.  The pivoting handle was replaced with the older, but proven cam design.   The larger , flatter tooth surface was replaced with the older, but proven one-way, aggressive tooth design.  Essentially, Black Diamond released a Petzl Ascension with a larger carabiner loop.   When Petzl releases their updated ascender, it will likely include a larger carabiner loop and choosing between the two will come down to cost and personal preference.

Before you think everyone is copying the Petzl Ascension design, let's not forget that ascending rope is also referred to as Jumarring and the devices used are often generically called "Jumars".    In 1958, Swiss inventors Jurgen (Ju) and  Walter Marti (Mar), developed the first mechanical tool for ascending rope called the Jumar.  My first set of ascenders probably date back to the early 70's which are nearly exact replicas of the original Jumar design. (image below) 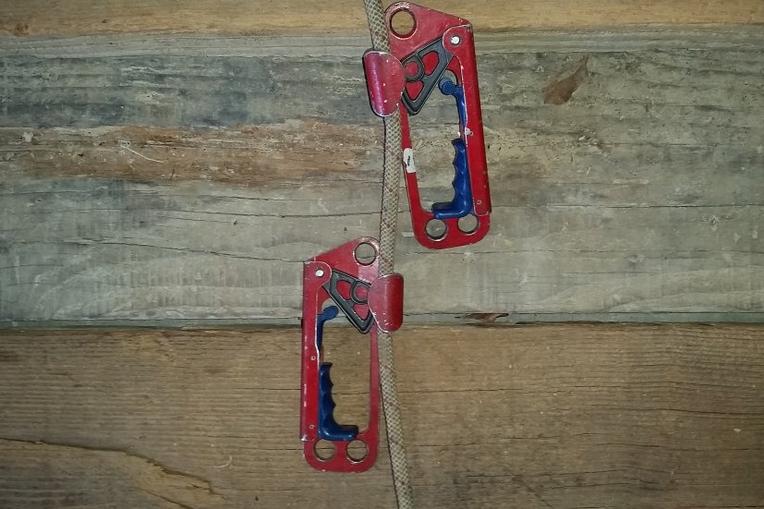