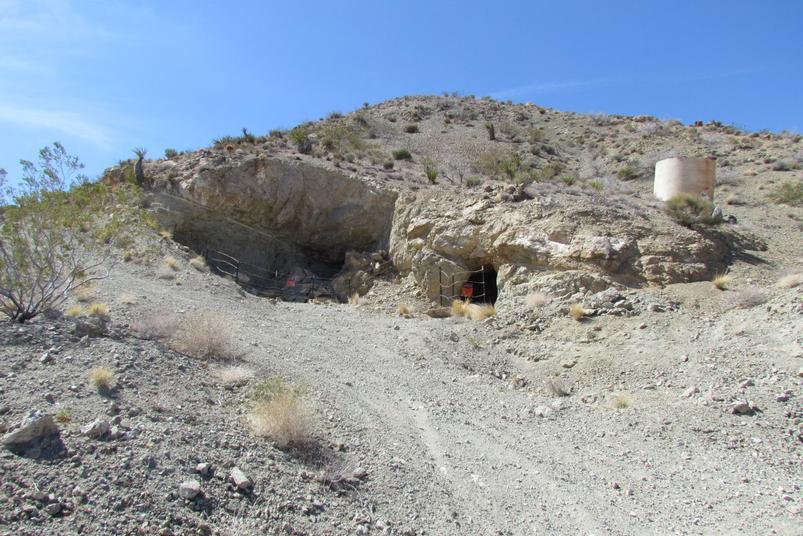 We've returned to the Eldorado Rand too many times looking for safe passage to the lower levels.  Since our first visit to this mine, we knew it was unsafe.  Between layers of hard rock, you can see thin layers of soft gypsum which makes the mine prone to shifting.  You can see in the images below that there are collapsed areas throughout.  Some of which occurred after each visit.

I used to laugh at the miners when I would see all the wood shoring throughout the mines.  The way I saw it, if the many tons of mountain above was going to collapse, the little sticks of wood weren't going to stop it.  As you can see in the images below, everything around the little sticks is collapsing, but the sticks are holding fast.   The miners knew their craft well.

We allowed a few months to allow collapsed areas time to settle hoping to find more stable areas below.  What we found in the deeper areas was much of the same.  When pockets of valuable ore are found, an effort to remove as much of it as possible results in a stope which can resemble a cavern.  With the limited amount of shoring, this mine was stoped far too wide.

During our most recent visit, we experienced a legend of the Cornish miners.  According to their legends, the mines were protected by gnome-like creatures resembling those used as lawn decorations.  These gnomes were considered to be good luck and  would give a loud knock within a mine which served as a warning that a mine collapse was likely to happen.

We've experienced two such knocks in our years of exploration.  It's more so a feeling than a sound.  The sound is loud, hollow, and muffled.  The tone is sudden and so deep it stirs every surface creating an instant dust cloud.  It's disorienting as it passes deep and through you.  It's something very difficult to describe since it's unlike anything.

Of course, the knocking isn't a warning from mining gnomes, but they are a warning of possible larger seismic events.  Over the millions of years, these rocks have reached a natural balance of pressures.  The mining process of removing interior rock material alters these natural pressures and can place an enormous amount of stress on a single keystone.  These rocks can shift or burst creating a loud thud the miners knew as "Tommy Knockers".