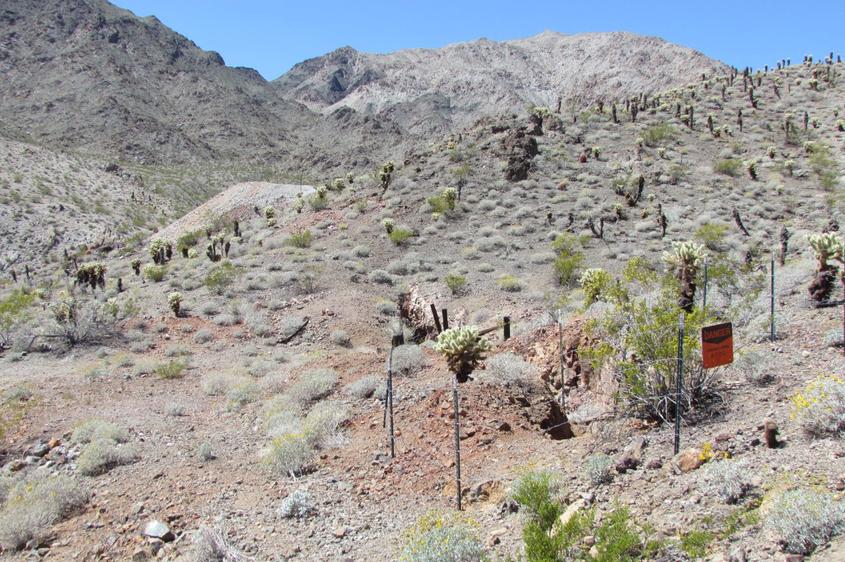 We were mostly disappointed with the mines surrounding Searchlight, Nevada.  As remote as they were, we expected several full days of mine exploration, but only found a few mines that were not sealed or posted as "Private Property".

It's still worth a visit for all the relics laying around, but we were hoping to get underground.  You'll also find yourself close to Lake Mojave and several secluded beaches along the river, so you can still make a nice family day of it.  The approaching trail is comfortable and any slow moving, high clearance vehicle can get there.

Dupont Mine has several work sites over  several valleys.  We originally believed them to be independent of each other, but now know them all to be registered under "Dupont Mine",  "Dupont Mine Camp", or "Camp Dupont MIne".  Prior to Dupont Mine, it was known as either the "Sazarac Mine" or the "Big Shot Mine".

Dupont Mine was where we encountered our first chuckwalla.  I'm familiar with Latin American reptiles that can reach several feet in length and the Florida Alligator that can reach many more.  I've never even heard of a "chuckwalla" until after we researched it when we returned home.  Prior to this encounter, we've only seen smaller, thinner, lizards around 6" in length.  We've read that the chuckwalla can reach lengths of 16-18" and the one we saw was at the max of that estimate.

It looked menacing, but didn't seem aggressive or concerned with us at all.  If anything, it appeared curious about the apple my wife was eating.  We left the apple core nearby.  It turned to face it, but didn't move to it while we were in sight.

Now that we know a bit more of the area, we can return more informed and with recalibrated expectations.  From satellite images, we can see several structures to the north.  Even without getting underground, seeing standing cabins makes a trip worth the time and effort.