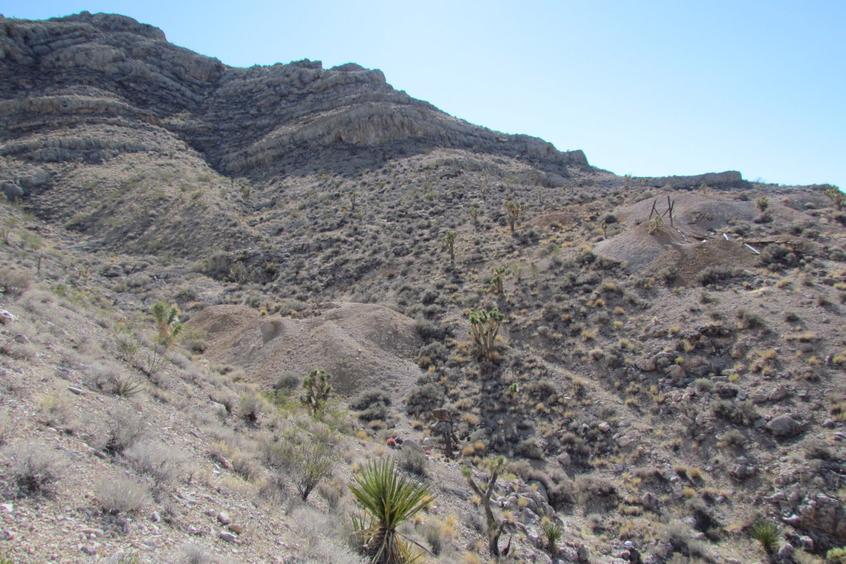 The Bill Nye Mine has since been sealed.  There are some open portals and collars to this mine, but anything open has very little depth.  Most of the mine has been back-filled or foamed shut.  The main portal has very sturdy bat gates.  Do not alter or remove mine safety devices or barriers.

Since its sealing,  a female Gray Fox has taken residence within the mine.  We've seen it in and around the mine on several occasions.  The surrounding valley is well protected with an abundance of food and a  nearby water source.  In an ajacent valley, we saw what appeared to be a younger male gray fox.  Both appeared to be in good health and likely part of a larger breeding population in the area.

The historic Bill Nye Mine is located behind the active surface mining operation of the same name.  I say "active", because there is modern equipment in the current Bill Nye Mine staging yard, but we've only seen workers on site a few times and none within the past few years.  We have yet to visit the newer, roadside Bill Nye Mine.  The site appears to be abandoned and there does not appear to be a current mining claim or ownership at this site, but because the site is still posted,  you should assume any entry is trespassing.

Primary mining at Bill Nye Mine was listed as lead and zinc, but we saw no signs of either which was odd.  Miners followed distinct and obvious mineral veins in the rock. Usually, we'll find traces of the ores within the rock faces or trace in the tailings.  There didn't seem to be any order or reasoning to this mine.  It zig-zagged into the mountain.  Adits branched off into different directions and abruptly ended.  This wasn't even the type of host rock we'd expect to find lead.  It was as if the entire mine was guessing.

We located two incline shafts.  The first went about 40 feet down before it leveled and ended.  The second incline shaft had more depth and a side cut that we thought to be another level, but was just a larger stope.  The lowest level split into three directions, all ending abruptly.

The wash to the mine is unapproachable for most vehicles.  Even with a well built offroad vehicle, you should expect some paint damage if you attempt this route. Otherwise, reaching the historic site requires a lengthy uphill hike.  The mine is now secured and there's nothing to see that is not already in the gallery below. Unless you enjoy hiking, you may want to move on to an easier location.