Azurite Mine  / Boss Mine

Before you get mad and complain, read the listing first. 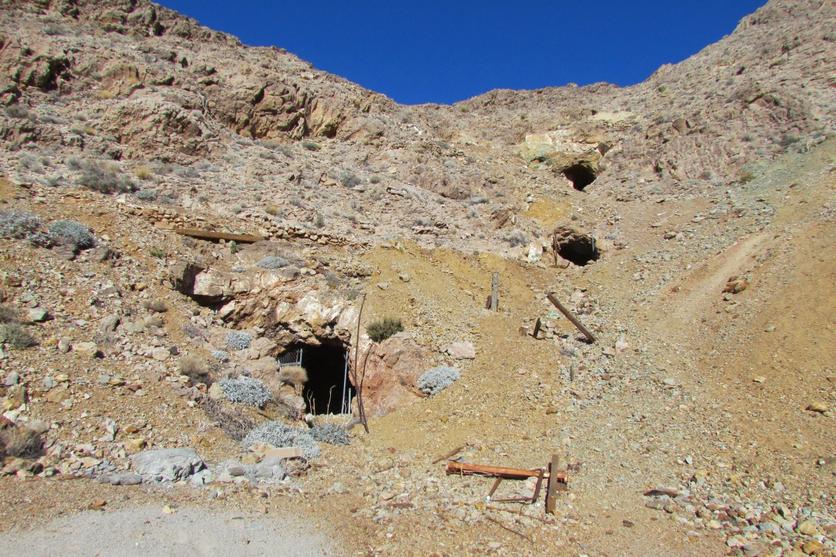 Since this mines discovery in 1899, various maps have identified this as either the Azurite or Boss Mine.  Some of these maps are identical with the only variables being the name and year. Since this is a historic mining site,  we're going with the historic name to offer some separation between the Azurite, Platina, and remaining Boss Mine within view of this mine site.

The original Azurite Mine, Site 1, is located in the valley beyond these forward mines.  Azurite Mine Site 2 began before the Boss and Platina Mine camps were in place, but since the base camp sits directly below the Azurite Mine Site 2, it's easy to make the assumption that they were still the same operation.

The above applies to the historic names of the mine sites.  Around mid-2012, 13,200 acres was acquired by a copper and gold exploration company.  This company has renamed all 13,200 acres  as the Boss Property which encompasses many historic mines within their property lines and further adds to the confusion.

This is one of the mines I get the most complaints about and it's because many were introduced to this as the "Boss Mine".   There are very few large mines in this and most mining districts that have not been renamed.  I'm not sure why some get upset over and want to be right about this one more than others.  I don't know how else I can say this.  This mine is Azurite Mine.  This mine is Boss Mine.  Call it  either one and you won't be wrong.

Being right isn't as important to me than being accurate.  If you believe this mine should be relisted under another name, please include a reference that supercedes the USGS,  Mineral Resources Data System,  BLM, and the Mineral Industry Locator System databases,  for corrections.  The links to those references are at the top of each mine listing.

Our most recent return to this mine was a result of a discussion in the old forum about objects I've been hiding in some images. One of our most active forum members found an unintentional hidden object.   Above one of the upper portals we captured a picture of what she believed and hoped to be a wolverine. The stance and fur pattern did appear to be similar, but details began to pixelate when enlarged to the point where positive identification was not possible.  Wolverines  have not been spotted in this area for well over a century, which made the possibility of rediscovery less likely, but added to the excitement.

We felt there was still a possibility whatever we captured in the image was something stationary that just looked like a wolverine to hopeful eyes.  If you want to see something bad enough, the mind can sometimes help you see them and we wanted to be sure that wasn't the case.  We were able to match our position and view to the original image and found no stationary object that resembled a wolverine.  Whatever we captured previously was moving.

We continued to explore in and around the mine for more clues like tracks, scat, and bones associated with an omnivore.  We found none, but we again unintentionally captured a clue.  The miners would rub a finger on the soot of their carbide lamps and smudge a dot on the side of ore chutes to count each cart load.  A miner took the time and effort to write in carbide smudges:  "Follow arrows to see the badger". The writing was so faded we didn't see it until we returned home and uploaded the newest images, but we've been through all levels of this mine and followed each to an end and found no badger.

There was an active discussion about an animal rediscovery in the forum, but the possible rediscovery of a wolverine and the location was held close.  Without knowing the location, another forum member stated that he and his wife have seen a badger within recent years and actively hunting within two miles of this mine.

The miners wrote about badgers within the mine over 50 years ago and there are still recent sightings.  Badgers aren't uncommon to the Mojave Desert.  In fact, this is their natural home, but they are rare to see since they are mostly nocturnal.  If real and considering badgers have the average  life span of a house cat, this would not be the same badgers, but a healthy breeding population that extends generations.