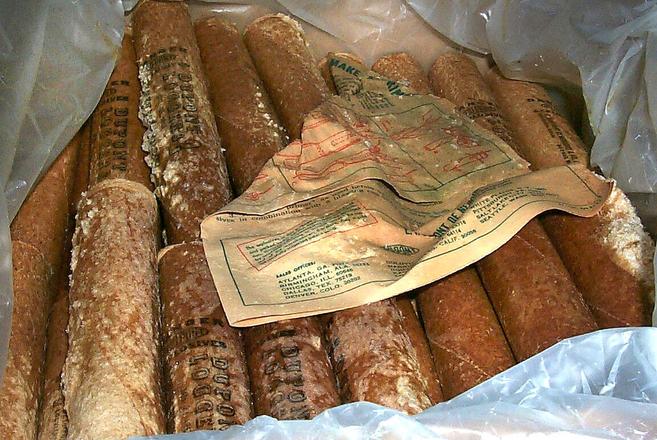 Think about it too hard and you'll blow up.

Over the years, we've explored many mines and have occasionally come across abandoned dynamite.  Most has been dry and appeared to be in great condition, but we have come across the dreaded "sweating" dynamite as shown above.

I'm sure many of you have heard the warnings about "sweating" dynamite.  For those unaware,  old dynamite is said to have a tendency to sweat or leach out nitroglycerin which can crystalize and/or pool and become extremely touch sensitive.  Some have gone so far as to say that even a gentle touch can detonate nitroglycerin crystals.

To prevent this "sweating" from occurring, it was common practice for dynamite boxes to be rotated.  We've seen dynamite boxes labeled with numbered weeks on different sides to remind and aid in this proper rotation.  As mines were abandoned, proper storage and rotation ended and finding "sweating" dynamite became more likely.

On more than one occasion during hazmat removal, we've tested the warning about the sensitivity of "sweating" dynamite by throwing sticks over cliffs. *

In doing so, I figured one of three things would happen:

1.  Life would end as I walked it out or just as I threw it.

2.  It would explode as it hit the valley floor.

I had a strong suspicion that nothing would happen, but as I tossed the stick of dynamite over the cliff, I did cover my ears hoping for an explosion.  After about 10 seconds, everything was still quiet.  I turned around and saw that most of those with us didn't even bother to cover their ears.

I recently had a conversation with someone in Forestry who said he knew a guy who has responded to several emergency calls involving people who have blown themselves up by handling "sweating" dynamite.  That statement and my experience were in direct opposition, but since he said "several", surely there would be references readily available.

My first source of research was a simple Google search for:

I was able to locate many references to the dangers of "sweating" dynamite, but not a single reference to any "sweating" dynamite causing injury or death, which seemed odd since everyone knows how dangerous it is and that guy said he knows a guy.  Oddly enough, many online references appeared to be repeating the same warnings from the same two sources.  The US Forestry Service and the Bureau of Land Management of various states.  All of the warnings were nearly identical and none provided any science to back up the claims.

In search of a scientific explanation,  I contacted a friend who is a Pharm D (Doctor of Pharmacy) and asked him about the explosive qualities of Nitroglycerin.  He stated that in its purest medical form, Nitroglycerin only has a shelf life of about 6 months.  Even if stored properly, at the end of 6 months, it would have a potency of less than 80% and this degradation was consistent.

Further, Nitroglycerin that has leached out could not be reconstituted into anything explosive if left exposed for even a short period of time.   He then reminded me there isn't a chemical in existence that will not desensitize and all chemicals will desensitize much faster when left exposed.  He was very confident in his statements.

My next conversation on this topic was with a retired Army First Sergeant.  During his 18 year career, he's served as an EOD (Explosive Ordnance Disposal) Specialist, Instructor, and served as First Sergeant of the Army Munitions and EOD Training Department.  I could not have found a man more qualified as an expert on this topic.

"It's dynamite, so don't fuck with it, but don't believe the bullshit.  For whatever reason, some loud mouth EOD guys act and talk like everything can blow and everything is down to seconds.  If an EOD guy plays up that you'll crater your state if you bump it, he's one of those loud mouths.  That guy will dramatically click his pens open. "

What he said that surprised me most was that the crystals seen on "sweating" dynamite isn't nitroglycerin at all.  The crystals are sodium nitrate which is non-combustible, but does accelerate the burning of combustible materials.  It is an extreme oxidizer, but needs extreme heat for detonation making detonation "unlikely" by itself.

When I began to research this topic, I was expecting to find some science or accident reports to back up the volatility of "sweating" dynamite claim, but didn't find a single example in support.  It appears that many warning of the "sweating" dynamite threat are repeating statements made by  the same two agencies.

The guy who knew a guy who claimed to have responded to several emergencies of people blowing themselves up with "sweating" dynamite was a victim of exaggeration.  The guy who told the story likely read about or heard the story from someone else and retold it as his own to add validity or to just brag.  I think most people know a guy like that.

This article is not at all saying to disregard any form of dynamite as a threat.  I'm still going to advise everyone to avoid it and treat it as a significant threat, not because it's known to cause injury and death, but  just because it's dynamite.

*This act of idiocy was in the company and under the strict supervision of disposal experts.