Fred Piehl:  Born August 22, 1892 and died February 8, 1951 at the original Mountain Pass Mine site where he was the original claim owner.  Most of us will know it most recently as Molycorp which was, until 2015, the only Rare Earth Element mine operating in North America.  Elements mined there held significant importance within industrial, scientific, and military sectors.

Very few people will be remembered as that influential in the building and development of a nation.  If you're ever in the Goodsprings, Nevada area,  we hope you take a few moments to visit the Goodsprings Cemetery and pay respects to the Piehl family.

Photos are presented as a courtesy of the Fred Piehl family and are not for redistribution.
Copyright © VegasUnderworld.com. All rights reserved.

The Argentina Mine Mill received ore via aerial tramway from the Argentina Mine above.   Although it was the primary mill for the Argentina Mine, it did serve as processor for some of the smaller, surrounding mines.  This area is visible from the pavement and is easily accessible in a car without 4WD.  Since the mine mill has easy road access, there is a large amount of graffiti and garbage throughout this site.  All deep shafts and portals at this site have been sealed. With supervision, this can be a family friendly location.

In 1973, an intellectual contest was created called "The Game" that incorporated live action, role playing, and problem solving.  In 1983, The Game reinvented itself into a larger, international production with each subsequent game one-upping the previous and even included live actors staging player arrests and kidnappings.  Each obstacle tested their skills in problem solving and code breaking.  Once solved,  The Game then tested their skills in navigation, racing, and hiking.   The Game had original ties to Los Angeles and Seattle, but as it grew in popularity, events were expanded to other large US cities and internationally.

I first heard about The Game in 1999 when the event was held in New York City where a Marriott  hotel employee found a container full of a fluorescent green liquid labeled "Bio Hazard" that prompted the evacuation of the hotel.  If you're not familiar with that particular Marriott Hotel it's no longer there, but the previous address was 3 World Trade Center.  The Game event was obviously pre-911, but it was post 1993 when the same group of terrorists detonated a bomb in the same targets garage hoping to topple one of the towers into the other.  It surprises me how many people remember 911 as the first attack.

Competing in these events were teams from various universities, members of think tanks, and employees of advanced computer and technology companies.   To compete in The Game, contestant teams are either invited or pay an entry fee which far exceeds the prize value.  Some teams spent many thousands of dollars in specialty equipment and training excursions. Considering the competitors often held high level positions in multi-million or billion dollar companies, prize money was less important than bragging rights.

In 2002, The Game titled "Shelby Logan's Run" was held here in Las Vegas which brought them to the usual tourist areas of Las Vegas including:  Valley of Fire, Fremont Street, Lake Mead and Hoover Dam.  Each area had several puzzles to solve.  The final leg of the competition brought them to Goodsprings, Nevada.  The specific puzzle areas in and around Goodsprings were:

A clue from one of the previous solved riddles directed teams to the Argentina Mine complex* where Bob Lord, a Microsoft Software Engineer, and his team were one of the first to arrive.  In part, the clue read, "1306 is clearly marked. Enter ONLY 1306. Do NOT enter others.".  Additionally, there was a warning in bright orange marking the wrong portal which read,  "No!  No!  No!  No!  No! ".

This was Bob Lord's first event and likely his first experience around abandoned mines.  He read more into the clue and believed the "No!  No!  No!  No!  No! " warning outside of the mine was part of the problem solving process.   Had he looked at the other open portal, he would have seen it clearly marked "1306".

Entering the wrong mine portal and using only the light from his handheld GPS device, he fell 30 feet down a shaft, shattering high neck vertebrae, leaving him with severe brain damage and forever a quadriplegic.  Of course, a lawsuit was filed and despite having a signed waiver, ignoring the on-site warnings, and not even using a proper flashlight, millions of dollars was awarded to Bob Lord and his family.

When we first came across the mill I tried to gain any information available, but specifically, photos.  I thought for sure, there would be photographic records of something with such great historic value.  After weeks of searching online and days of searching the UNLV library physical records, I came to the conclusion that pictures of the mill just didn't exist.

I was recently contacted by a descendant family member of Fred Piehl,  the original owner of the Argentina Mine and Mill.  A few emails later, I received the pictures I was certain didn't exist and the mill was greater than I'd imagined.  Cars around 8:00 of center in the first photo offer some scale.  Unless you've been on site, it's difficult to gauge size from the photos and even if you have, it's difficult to believe something like this could have been built so remotely in the 1920's .

Photos are presented as a courtesy of the Fred Piehl family and are not for redistribution.
Copyright © VegasUnderworld.com. All rights reserved.

Below are Fred and Helen Piehl along with Roy Rogers and Andy Devine.  Stars of the 1947 film; The Bells of San Angelo.  In the movie, Roy and Co-Star Dale Evans are tracking smugglers.  Along the way, they discover a silver mine.  You can see the Argentina Mine Mill as a movie set beginning at the 5:28 mark:

Below is one of the original mining crews of Argentina Mine.  I'm often impressed by the pride in presentation of early America which was barely 150 years old when this mine went into production.  Back in those days,  the average annual income was just $1368  and working hard was still something most admired. 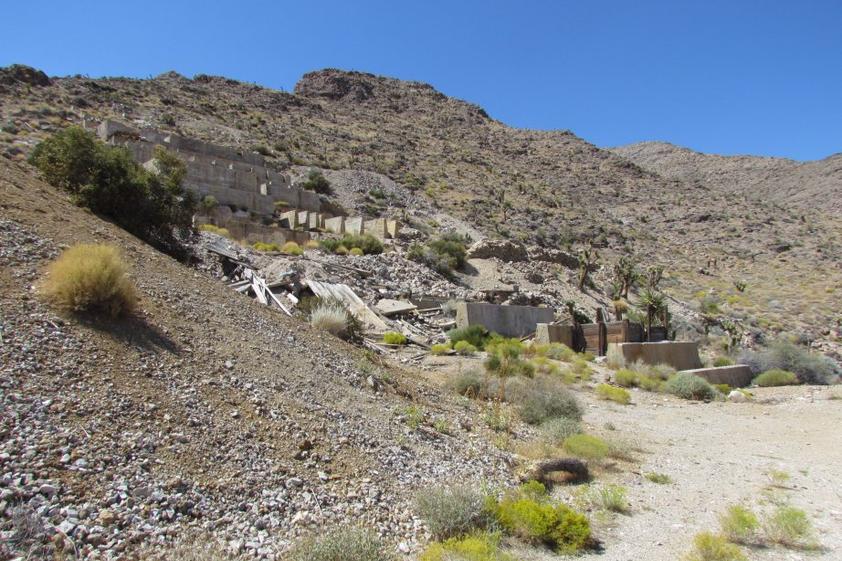 Photos are presented as a courtesy of the Fred Piehl family and are not for redistribution.