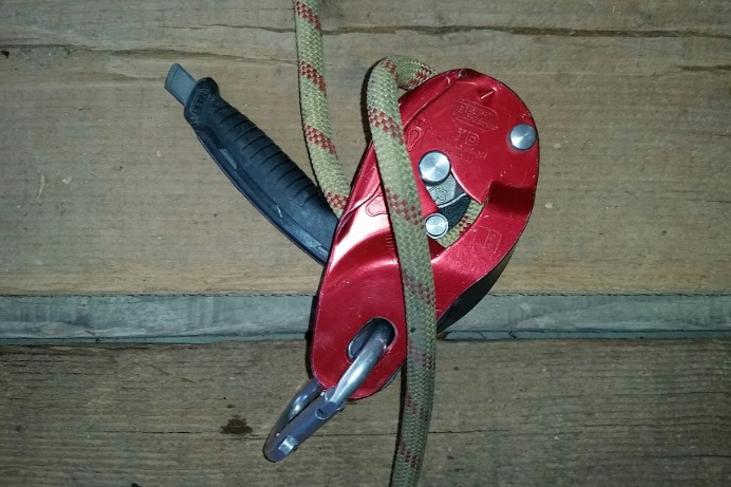 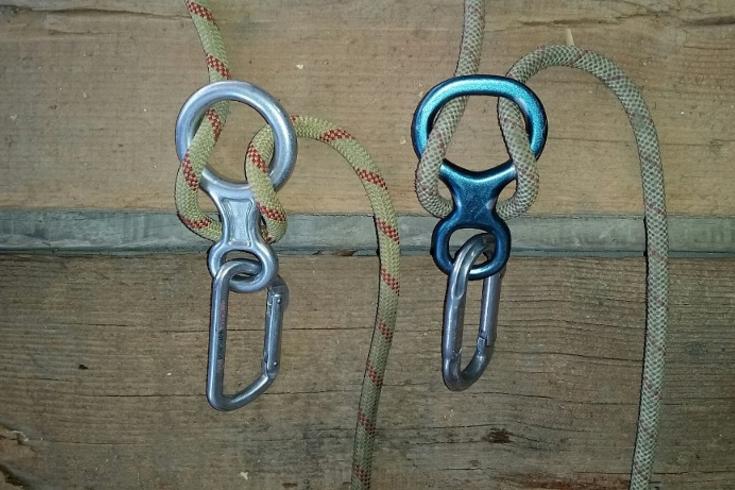 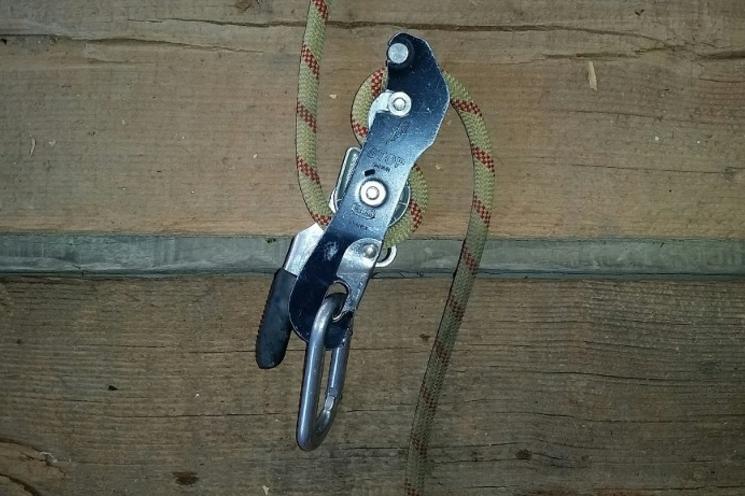 The drawback to the figure 8 is they mostly require both hands to use and knot tying is required for secure stopping mid-rappell.   Without moving parts, they have unquestionable reliability and have a smooth, continuous rope feed, but using one safely does require a greater level of attention.  If you want to learn rappelling skills, begin with a figure 8, continue to train with it, and keep one on a harness loop at all times.

The Petzl Stop (image below) was a great advancement over the figure 8.   I first used this device in the early 90's, but I believe it was available long before then.  This device can still be purchased new and, as far as I can tell, the design is nearly exactly the same.  One of the greater advancements over the figure 8 was its ability to self-brake.

Take your hands off the device and it stops and locks you in place.  That's what it's supposed to do. However, I have noticed that it does tend to creep and does so with various rope designs and thicknesses.  Not dangerously so, but if a product is called "Stop",  I expect it to stop.  To prevent this creep when I need to stay in position for extended periods, I often take a bite of the lower rope and wedge it under the handle to apply more friction.   It also has rope feed issues when less than full weight is applied like on a ladder.

Some newer climbers have difficulty threading and setting their rope into the Petzl Stop.    I was guilty of it myself because the way it threads the rope in from the bottom and out from the top doesn't feel or appear natural.  This has never caused any near accidents, but since I'm almost always the first person down a hole, I can't visually inspect the next climber and I'm never confident they completely understood the process.  That moment they lean back and put weight on rope,  I often hold my breath until they begin their controlled descent.

The Petzl ID is the newest descender and a complete redesign of friction technology.  (image below).   Also a self-braking descender, the advantage this device has over the Petzl Stop is this device actually stops and does so positively.  This device requires you to pull a handle to release friction in controlled amounts.  The further and harder you pull the handle, the faster you descend the rope.

Previous advanced equipment chapters covered the climbing rope and harness.  This chapter will cover several ways to attach yourself to your rope for the purpose of rappelling.   You may hear some call the process "abseiling".  It's the same thing.  A controlled descent down a rope.

You may have noticed that I skipped the various ways to anchor your rope.  As mentioned in previous chapters,  the purpose of this section is to cover the purpose  and not the use of this equipment.  I have a very minimalist approach to climbing and gear because it's what I was taught and what I find most familiar.  Again, take a climbing course to learn proper and good habits.

There are many descenders on the market, but each works using the same principles of controlling the amount of friction applied to the rope and allowed through the device.  The thicker the rope, the more friction involved.  Some work better with thicker rope.  Some require a certain thickness to work at all.  With so many variables, the combination of hardware to rope depends on personal preferences and what feels the most natural to you.

Even though we have some of the newest rappelling gear available, we still regularly use our simple figure 8 devices.  (image below)  Once in a while, a company will market a "new" figure 8 design, but it's always the same large loop over a smaller loop.  The only difference is an extra protruding finger here and there or a loop redesign to help keep your rope positioned well.

In a panic situation, most will instinctively tighten muscles and pull what they are holding. Pull the handle all the way down and the device will put itself into a panic locking position.  The only way to continue the descent is to recover the device by swinging the handle the other way and reset the device.   I've seen one apart and am still unclear how it works.

This is an expensive piece of equipment, but since I don't believe climbing gear should be cheaply made, I won't count cost as a negative.   Expect to pay around $200-250 for this piece alone and consider it well spent.  The only negative that comes to mind with this device is the weight.  1.2 pounds doesn't sound like much, but aside from rope, it's my single heaviest piece of climbing gear.  Combined with all the other pieces I have to hike in and climb with,  it is noticeable.  As with the Petzl Stop, the Petzl ID tends to have rope feed issues when less than full weight is applied like on a ladder.

Rappelling is easy since gravity does most of the work.   The next chapter in this series will cover the harder and more complex task of ascending your rope.